Grevin Seoul opened in early summer 2015. This is CDA’s fourth wax museum, and the first in Asia.

The venue is more an attraction than a static display of wax figures.

The music plays a prominent role in the museum. Each one of the fifteen scenes has its own specially composed and orchestrated musical piece.

Such and extreme approach deserves a perfect sounding sound system. The one we designed is fully digital, as we normally do, from the sound sources to the amplifiers. Thus, the original quality of the on-site mix is unaltered. It’s like having a straight line from the studio microphones to the 150 speakers installed in the museum.

To go as far as possible in this process, we have worked on less intrusive equalization methods to reduce phase aberrations.

About the sonic clarity of the system, music composer Patrice Peyrieras said: "It’s like being back in the recording studio. The sound accuracy is simply amazing."

One of the scenes is a private jet in which one can meet many celebrities. There was no question that the simulated sound environment of the aircraft could be played by easily locatable discrete loudspeakers. Working closely with Kingsmen, the set company on the project, Akio Takeda, our Tokyo-based designer, has developed a unique contraption that uses the aircraft cabin body as an emissive surface. The result is strikingly realistic.

The sound quality is not the only benefit of our "less is more" approach. In a trice, the museum can be reconfigured to accommodate special events. With their tablets used as remote, the users can recall presets, for example to play the sound of a DJ consoles in some areas. 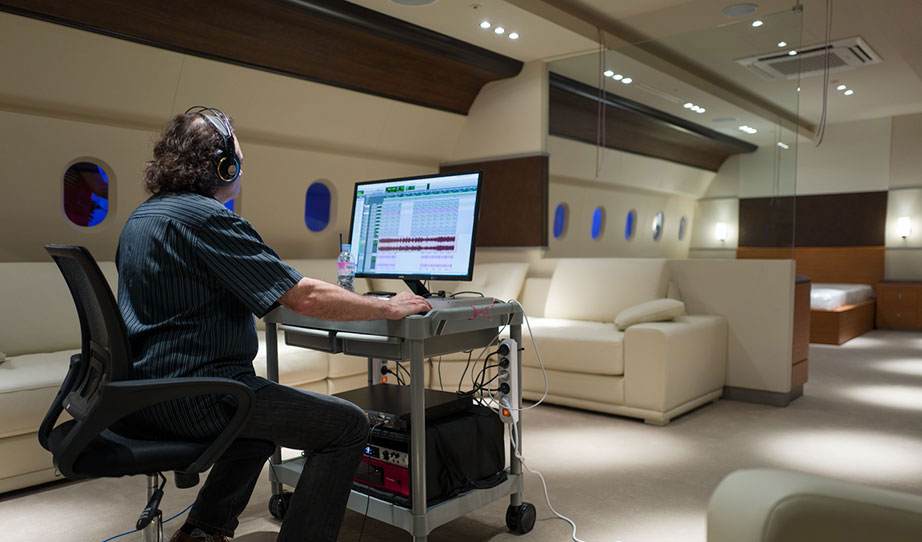