As we have seen in our 3D introductory paper, 3D passed from attractions to movie theatres before becoming commonplace in our living rooms. Technical novelty is no longer sufficient to attract visitors. Fortunately, thanks to technological advancement, designers can take 3D technology from theatres to other attraction types, such as dark rides or people movers, paving the way for exciting hybrids.

Even though 3D technology is widely used in homes and theatres, some confusion about the technology required still exists. Furthermore, while all systems can be used in theater-type attractions, not all are compatible with other attraction formats. As clarification, we have put together a quick overview of available systems, each with its pros and cons.

Until relatively recently, the only practical way to project a 3D image was to run two films simultaneously, one for each eye. A set of filters (on the projector and viewer's glasses) blocked the unwanted image.

Initially, two film projectors were synchronized. When video projectors replaced their film ancestors, the same principle was applied: two video players fed two video projectors fitted with polarizing filters (more details on the physical principle later). The light from the left image is filtered in one direction while the opposite eye is filtered in the other direction. The filters mounted on the glasses have the same characteristics as those of the projectors, but with a 90° offset so the opposite eye image is "blocked".

– The first relatively simple and mature technology has been adopted and become a standard,

– In case of technical problems affecting one projector, the show can be run with a single projector (2D is better than nothing on a busy day),

– Unlike cinema servers, video players commonly used in attractions can easily be synchronized with each other and with show elements (lighting, special effects...),

– The media rights management system that is mandatory in movie theatres to prevent piracy adds unneeded complexity to the technical setup. In theme park attractions, rights management is less likely to be an issue. 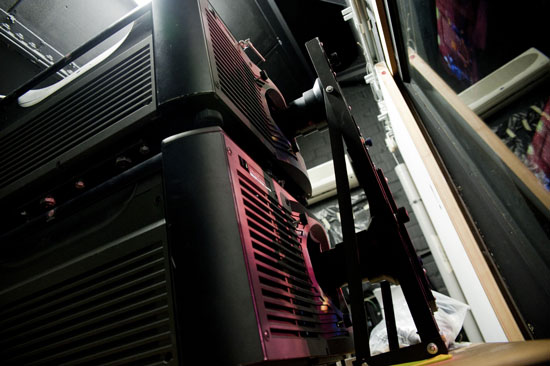 The picture quality and 3D effect of the conventional two-projector systems is far from perfect. The slightest misalignment of projectors or filters results in a reduction of the 3D effect. In addition, synchronization between the two players must be rock solid. Linear filters that are the norm in the parks oblige the viewer to keep his head straight to keep the 3D effect.

To circumvent these problems, the other approach, made possible by modern digital projectors and high bit rate video sources is the sequential projection of left and right images, from a single player and on a single projector. Instead of being projected at 24 frames per second as in a conventional film theater, the rate is 48 images. In practice, to avoid flicker, the technique of double or triple flash is used. This means that each frame is flashed on the screen two or three times, so the actual rate is 96 or 148 frames per second.

By knowing at any given moment to which eye the image being displayed is destined, it is possible to block the opposite eye by using different techniques:

– Polarizing filters
This is an improvement of the two-projector method. By showing a single image at a time, the risk of ghost pictures (ghosting) is significantly lower. It is possible to use linear filters, or the new circular filters like those popularized by RealD. They allow a good 3D quality even when the viewer is not aligned with the screen. The use of polarizing filter requires a metalized screen.

– Spectral filters
Two commercial systems make use of special optical filters: Panavision and Dolby. Their main advantage is the ability to project on any surface, and not only silver screens, making them ideal for rides and people movers. Although the chromatic aberrations are practically nonexistent and the 3D effect is close to perfection, the light efficiency of these systems is relatively low, so they require larger, more powerful projectors.

– Active glasses
Shutter glasses are similar to most models for home use: they contain an electronic circuitry that controls an LCD shutter. An infrared transmitter installed in the theater synchronizes the shutter action to the film. The implementation of these systems is very simple, and they also don't require a silver screen. However, managing the logistics of expensive and somewhat sensitive glasses can be an issue in a park.

Let's look in more detail at the various commercial processes currently available for each technology:

– Real D
RealD uses circularly polarized filters. Pre-processing is applied in the player when decoding images to reduce ghosting. RealD provides two projector filter models: the Z-Screen, an electronic filter which is very simple to install in front of the projector lens, and the largest "XL", whose adjustment is more difficult, but allows for better performance. A silver screen is needed to use RealD. The glasses are passive models that can be re-used after cleaning. Recently, Tejix used an XL in the Wings of Courage theatre in Futuroscope. In this installation, the brightness is almost 10 times the SMPTE minimum requirement.

– Master Image
Image Master system is amazingly simple and effective. It is considered by many as the brightest. It consists of a standalone device that can be rolled in front of the projector. The upper part of the unit is a filter disk rotating at 4320 rpm, in sync with the video. As with RealD, it is necessary to use a metal screen and passive glasses that can be cleaned and re-used. One issue of the Master Image rotating filter is that it is very noisy, and may be audible from the room if the sound-proofing between the theatre and the projection booth is not sufficient. That makes Master Image an unlikely candidate for rides. 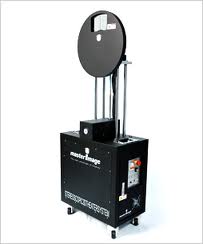 – Expand
Expand offers a solution based on active glasses: an infrared transmitter installed in the room synchronizes the occultation of shutters on the viewer's electronic glasses. Implementation of the system is straightforward. Any surface can be used as a projection screen, which makes this solution usable in all situations. However, the glasses are relatively fragile and should be cleaned with caution due to the presence of electronic circuits. Managing an inventory of expensive glasses is also poorly suited for an amusement park situation where throughput is crucial. 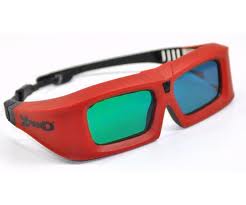 – Dolby
Dolby has a license to use in theatres a clever technology developed by the German company Infitec. Theme parks are not required to use the Dolby distribution channel, and can likely buy filters and glasses from other sources. The method relies on the spectral division of light, a little like anaglyphic color filters. The wavelength of each primary color is slightly offset around a median value. Treatment is applied to images within the video server to compensate for chromatic aberration resulting from this process. A small spinning wheel holding the spectral filter must be installed in the light path inside the projector. This operation is not very complex, but requires disassembly of the projector. The manufacturer Barco offers projectors pre-equipped with a Dolby spinning wheel. Visitors must wear somewhat expensive passive glasses fitted with the high-tech optical filters. Dolby offers many advantages: 3D effect and colorimetry are perfect, any surface can be used for projection (a silver screen is not needed) and switching from 3D film to 2D content is completely automatic (most other systems require manual intervention to move the filter away from the projector lens). In addition to the cost of glasses, the main concern of Dolby 3D is its efficiency: about 10% of the light projector is passed by the system, two to three times less than other processes. Thus, good illumination requires the use of a large projector, which will encumber investment and operating budget. At lastly, it worth noting that Infitec also works with fixed filters in two-projector configurations. 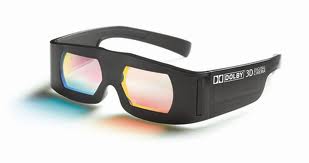 – Panavision
Panavision joined forces with Omega Optical to offer a 3D system based on somewhat the same principle as Dolby / Infitec. The light spectrum is divided by a rotary filter in 10 bands. 5 bands are visible to each eye with passive glasses equipped with advanced filters (Omega Optical manufactures optical telescopes). Constraints and benefits are identical to the Dolby system, even though Panavision claims greater efficiency. It should be noted that Panavision provides lenses that can be used with conventional film projectors. 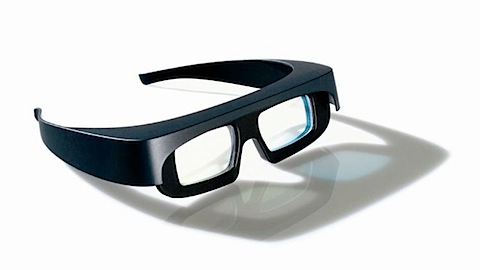 A word on screens

Screens used in 3-4-5D theme park attractions are identical to those found in movie theatres: a PVC canvas on which a white coating is applied. The fabric is laced to a metal frame using the eyelets on its edge.
If speakers are installed behind the screen, as is normally the case in 4D attractions, the canvas is perforated with holes of 0.5 to 1 mm at a density of about 5 %. These holes are not visible from a few meters distance from the canvas. When active glasses or light spectral division such as Dolby or Panavision are used, images can be displayed not only on a regular white screen, but on any surface. Combined with the relative insensitivity of these systems to the viewer's position relative to the screen, they should be selected in applications where the viewer is moving around the screen, i.e on a ride. However, the most common 3D processes use polarized light rays: the omnidirectional light rays at the projector output passes through a filter that allows rays only in a given direction (the rest is lost). The screen on which the light is reflected must keep light rays polarization properties. This is possible by coating the screen PVC fabric not with a white surface, but with an aluminium oxide coating which gives it a silver appearance. Metallic screens have the defects of their qualities: they are high-gain screens. They reflect much more light than they receive. A gain of 2 - 2.5 is typical. As in nature, nothing is created; the light gain is obtained at the expense of viewing angle: more gain means more directivity. In practice, viewers installed on the sides will get a much dimmer image than those installed in the centre. The corollary is the presence of a "hot spot" in the centre of the screen. It is not possible to obtain a uniform illumination on a metallic screen. We must cope with the brighter centre, and install seats within a rectangle whose width is less than the base of the screen.

Screen cleaning:
White screens can be cleaned with care provided no excessive pressure is applied to the surface and no detergent is used. Silver coated screens are much more fragile and must be gently dusted from time to time. Screen material should be replaced every few years.

A word on glasses

Glasses are the great puzzle; They must be distributed, collected, cleaned and re-circulated. These constraints hardly exist in movie theatres where the glasses are often sold and the flow of visitors is very low compared with a hi-capacity attraction.
In order to avoid transmission of bacteria (meningitis cases have been attributed to poorly washed 3D glasses) glasses should be disinfected using wipes or by cleaning in a dishwasher. Both processes significantly alter the effectiveness of the filters. With glasses of average quality, the 3D effect is greatly impaired after a few washes. It is up to management to choose between long-lasting, good-quality glasses and cheaper models that must be replaced after a few weeks in the best case.

As one might expect, the high water temperatures of professional dishwashers do not suit the glass optical filters.
Miele has addressed the problem by offering a special version of one of its model, modified for a 40 ° cycle. Miele also offers special baskets for 3D glasses. The 5 to 8 000 Euros price tag of the Miele device might be an issue for some operators.

Theme parks can benefit from the advances of 3D reproduction both at home and in theatres. Advanced techniques such as spectral division allows sharp 3D images in all kind of viewing situations and screen surfaces. Partnering with seasoned theme park experts such as Tejix guarantees superior performance from reliable systems.