Walk along the paths of a park where the background music is not playing and you will experience that sinking feeling "that something is missing." The background music (or BGM) in a theme park is much more than just background noise: it is the emotional note guests will associate with their experience. Misinterpreted as an unprofitable accessory, it is often the poor relation of thematization, when it is not simply forgotten.

What to play?
The music selection is critical. It will determine the overall ambiance, and have a direct influence on the visitors’ behaviour and mood. This choice shouldn’t be left to chance. The selection of songs and their transition is delicate work (Tejix experts shine in this field) that takes into account the demographics of the park, architecture, local culture, sound system typology, marketing purposes and many other criteria.
Generating a loop of music relevant to a park is quite different to designing the musical mood of a store or restaurant. The park environment is tightly controlled. Far from vague background music, parkwide BGM is the soundtrack of a show where visitors are the stars.
Here is a list pitfalls which must be avoided at all costs in a park, whereas they are acceptable, and even desirable, in a shopping mall or restaurant:

Random selection
The idea that tracks from a list can be played randomly is wrong: the balance and transition between the titles is crucial. Furthermore, true random means the same song can be played twice in a row, which is not really the purpose.

Long loops
BGM is the sound signature of the area where it is played. It leaves its mark on the visitor. You remember the music playing in Disneyland’s Main Street, but not that of the supermarket where you go shopping. The reason is that it is a perfectly identifiable, relatively short loop. One-hour is appropriate. It provides enough variety while having a memorable impact.

Songs
The vocal pieces are likely to transform what sets the mood of the park into a radio station, the complete opposite of the goal of creating a "soundscape". Songs containing lyrics are also likely to have a limited demographic spectrum.

Jingles
In the same vein, commercial advertising does not have its place in the atmosphere of the park, nor does the latest success in fashion. The parkwide sound system is useful, however, for broadcasting "spiels." This term refers to recorded announcements. They inform visitors of the park opening and closing, shows and other events. These ads are usually stored on memory cards, and played according to a predefined schedule or on demand. Good spiels help to fill every seat of each show!


Speakers choice and location
The purpose of a background sound system is to provide uniform coverage. In other words, the sound level, and possibly other characteristics such as frequency response, should be consistent. Of course, unpleasant echoes and reflections must be avoided. The solution lies, in almost all cases, in a tight mesh of relatively small speakers. The promises from certain manufacturers that emphasize the spatial characteristics of their speakers in order to limit their number have to be taken carefully. A uniform distribution, be it through 360°, does not absolve the laws of physics. Lack of sufficient sound sources will lead to "hot spots", followed by dead areas. The result is unpleasant and counterproductive.
In a street, or in a building area, it is often possible to hide the speakers behind windows and set elements. The rest of the time, special mushroom-speakers are buried in the ground. Only the active portion of the diffuser is above ground, making them very discreet. Among others, Bose, JBL and Near, offers such models. Along with sound fidelity, you might want to look for speakers that resist to rain and other abuses, including reckless guests. 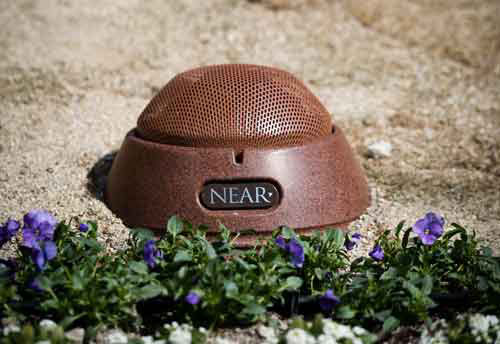 a ground speaker buried in the landscape of Legoland Japan

Speakers lines and electronic rooms
As we saw, a good system is likely to be composed of many small sound sources. The technique used to minimize losses in long cable runs is commonly called "70V". This somewhat improper term refers to a technique that can be compared to the power lines which connect power plants to cities: a transformer is placed at the output of the amplifier to raise its output voltage and internal impedance. An identical transformer (just smaller) is installed on the other side, close to the speaker. This trick allows the use of small section cables over long distances without having to suffer significant losses. The other advantage is that since the load impedance is high, it is possible to connect dozens of speakers in parallel on the same line. The only drawback is the quality and power loss induced by the transformers themselves. This problem is partially corrected by using modern amplifiers with output stages designed so they can feed high impedance loads without transformers. Tejix uses this type of amplifier.
Since our high-impedance lines can run for several hundred meters, a single amplifier cabinet is probably enough to cover one or two areas of the park. To protect the equipment and make it last, cabinets must be installed in a dedicated room with proper climate control. As we have seen, dozens of speakers can be powered by a single amplifier channel. So usually the number of amplifier channels will be defined by the quantities of zones rather than the number of speakers. The easiest way to feed the audio source to the amplifiers is to use the computer network. We'll see how in a just below:


Audio network
The system architecture may consist of several distinct areas, but in most parks all the music is sent from a central location from which controlling BGM, shows, parades and spiels is a breeze. Many protocols use common Ethernet hardware to deliver hundreds of perfect quality audio channels. This flexible technology is commonly used to connect the main control room to the remote amplifier cabinets. The same network is used to send back information status from the remote cabinets to the control station.

Processing
For reliability reasons, the music played in the park is stored on static media, such as SSD drives, which are flexible and reliable. Sounds from these sources must be adjusted and sent to the area for which they are intended. Thanks to advances in digital processing, a single piece of equipment handles playback, processing, routing and priority management. These processors are very powerful while providing a simple interface for the user. In most cases, the operator just has to click on the park map displayed on a screen to be offered a selection of settings and spiels for that area. Currently, most park rely on processors provided by the QSC brand. A single audio processor can handle up to 512 zones. It is so powerful that technicians can even use an iPad as a remote control to tweak audio and trigger live sound effects, during street performances for example.

Maintenance
If well designed, a sound system requires almost no maintenance. Each speaker only needs to be checked once in a while, so damaged units can be repaired. Even if they are weatherproof, speakers are sensitive to frost. If the park is closed in winter, it is best to leave the system on a specific signal that keeps the cones in motion. The movement combined with heat generation from the coil will keep them from freezing.

Finding the right designer
The choice of designer is critical. Experience in shopping malls and supermarkets is not enough. The sound quality should be better and more uniform in a park, and the system must be powerful enough to play spiels and even shows. Only an experienced designer, with a good knowledge of parks requirements can meet these challenges.

Summary
Far from being an unnecessary expense, a well designed BGM system is the foundation of good theming. It plays a central role in building the magic and can even be profitable when used for private events and shows. At the crossroads of art and science, Tejix experts are the best suited to design and install great sounding, immersive parkwide sound systems.