From concept to reality

We constantly insist on the importance of basing attractions on strong, structured stories. Unfortunately, good Theme Park storytellers are rare, and their fees are likely to be out of the reach of regional parks.  Smaller operators are left with the option of buying a technology-based attraction such as a shooting arcade or a 4D Cinema, where a mundane theme such as pirates or cowboys is applied as window dressing. Needless to say, the result is often... questionable.

So it was time for Tejix to put our ideas into practice. We decided to use our experience and creativity to design attractions in which technology serves the story, not the opposite. By selling these attractions to several parks the production costs would be shared, making them more affordable. Each park would retain exclusivity in its own territory.

Expedition Tiger: a great attraction in a reduced scale

The first concept we offer is called Expedition Tiger. We wanted a family attraction based on a simple and powerful script, one which children could easily follow. In Expedition Tiger, spectators visit a team of explorers of a special kind: they are developing "Tiger Cam", a wireless video camera that can be fitted onto a cat to follow its wanderings. Visitors attend the first test of this exciting new camera, and all goes well until, thinking that her baby is inside the tent, the tigress wearing the Tiger Cam decides to charge the tent where the spectators are watching the experiment. The only person who can help tourists is the young assistant present in the tent, who unfortunately, as the visitors has learned earlier, is frightened by the mere sight of an animal.

We first developed the story around the tigress, but something wasn't right. Fortunately. we had the idea to consult with Steve Alcorn during our scripting. An hour after we sent him our script, he came back to us and said: "The story is not about the tiger, but the assistant who is in the room." Everything suddenly came into focus: will the assistant overcome his fear of animals to save the audience? Our animal story was suddenly transformed into a heroic epic.

The next step was to give life to the show. We started to evaluate capacity and budget issues and worked on the logo and "mood boards". Some of the constraints we have imposed on ourselves are that the attraction should not cost more than a 4D theater, and should offer an equivalent throughput, approximately 500 guests per hour.
At this point we began to study the technical and safety aspects. For example, when the tigress charges the tent, it partially collapses just above the audience, a concept we had to explain to the various certification bodies.

With Expedition Tiger, we want to offer visitors the opposite experience from that of an impersonal 4D theater. Just like the future attractions we are devising, we designed Expedition Tiger as a total experience, from queue line to retail store. Visitors are immersed step by step into the world of our explorers. Every detail must be treated with the greatest care. The choice of props and furniture elements resulted from exciting discussions among our design and construction specialists.
Even if it is virtually invisible, technology is substantial in Expedition Tiger. The show requires more than 30 audio channels and a dozen high-definition video screens. Just like the rest of the show, we had a definite idea from the very beginning of the type of media we needed. We have assembled a creative team scattered between the Netherlands, France and India to create video elements and the original soundtrack of the attraction.

With Expedition Tiger, we purposely swim against the tide: no 3D glasses or targets to shoot, but a family adventure filled with surprises and twists until the very last minute. Our goal is to demonstrate it is possible to create a high quality show that combines adventure, education and action, within a budget affordable to the regional parks.
Producing the show is a thrilling adventure. We are reminded every day of the basic idea that prompted the foundation of Tejix: the balance between creativity and practicality is critical. One cannot exist without the other.

Our teammates have put their passion for detail to work to deliver a great attraction that will open for the 2013 season at Park Knuthenborg, Denmark.

In the meantime, you can visit our dedicated website: www.expeditiontiger.com 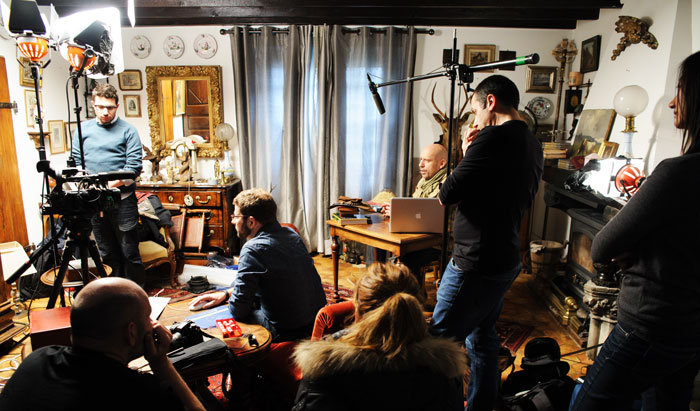