On Board Music & Light 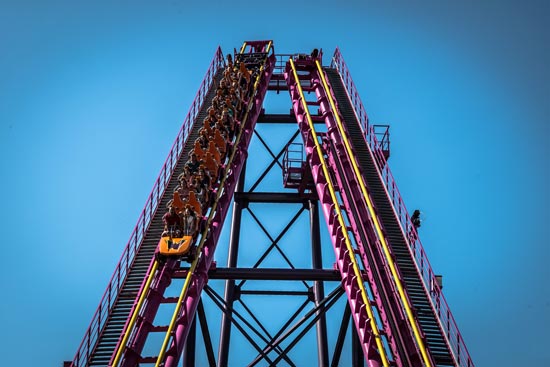 Roller coasters are the star attractions of parks that often use them as icons. It is often assumed that the sensations produced by these attractions are sufficient to create memorable moments. This is often true. However, the design of a coaster track shares many commonalities with story writing: a good start to set the scene, a central portion to develop the story and an unexpected ending. Despite their narrative nature, coasters are rarely used to develop an intrigue. Unfortunately, despite their powerful storytelling possibilities, coasters theming is often limited to a few props.

If there’s a story to tell on a coaster, the best way to do it is a  good soundtrack. No soundtrack is pretty much like watching an action movie with the sound turned off. If we rely on music as the diegetic element of the experience, the soundtrack has to be powerful, and, of course, customized to follow the ride layout.

Similar to an action scene music,  the score will most likely include strong tempi and keys variations to enhance emotional impact.  The orchestration will be largely dependent on the theming (and budget). While electronic music can bring nightclub-type adrenaline, there’s nothing like a  well-written and produced (real) orchestra piece to make the riders being part of the action.

In the early days...

The trick in coaster sound is to bring power onboard, without compromising safety. Disney engineers were the first to solve this challenge with Paris Disney Space Mountain, in 1995.

Since then, many other roller-coasters have been fitted with sound systems. Most of the time, their designs are based on fairly complex assemblies of sensitive elements. Such systems are prone to failure, so we decided to apply our clear design principles to Coaster Audio. We called it «OLS » for  «Onboard Light and Sound.»

We teamed up with a major coaster manufacturer and a leading park operator to define their requirements:

In addition, we have added features which seemed important to us:

- No moving parts, computers and conventional batteries
- Ability to play multiple sounds simultaneously (e.g. soundtrack and a spiel, or songs crossfade)
- On-board logic control to trigger events based on time and conditions
- Embedded digital audio processing (equalizers and filters)
- Lighting controller running in perfect synchronization with the soundtrack, for onboard show lighting.

True to our design approach, our work has mostly been to remove anything that is not absolutely indispensable and to select a minimum number of items of the highest possible quality. For example, we excluded from the outset the use of MP3 sounds which do not meet our quality criterions. We prefer audio files which have not undergone any manipulation. Just as in the kitchen, only the best ingredients can make a superb recipe. 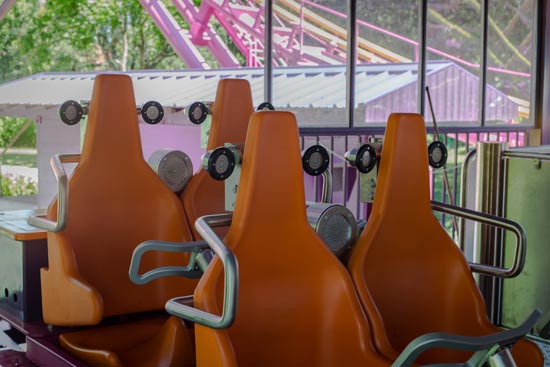 This is how OLS came to fruition. This system is the most compact and powerful system ever created for this type of application. It consists of three main elements:

The main complexity of this type of system is to embed a power source capable of supplying enough energy to a powerful sound system. Batteries, even the most modern, are not very suitable for this use. We chose instead to store the electric current in ...capacitors. These are passive electronic components that can be found in our computers and stereos, which can store energy for a brief moment. We therefore devised a giant version, capable of storing a large amount of power for several minutes. We worked with the best experts in "supercapacitors" to develop an ultra-compact array capable of delivering more than 100 Amps for a relatively long period of time. In addition to being effective, the capacitors technology we use is perfectly safe. In a normal cycle, the train returns to the station after a few minutes. The charge of the power system at that point is still 80%. In the station, two electronic chargers check the capacitors and bring their charge to 100% in a few seconds. Pads installed under the train put the capacitor in contact with the power chargers. Once the train leaves the station, its charge is sufficient to run several cycles without recharging!
Another advantage of super capacitors arrays is their reliability and lack of maintenance. OLS can operate for years without any significant loss of performance.

We needed a high quality audio player, an audio processor, a lighting controller and a logic controller capable of managing the playback operations on board. We chose to combine all these functions in one very compact device. To trigger sounds exactly at the right moment, reflective stripes are disposed on the track. Each time the sensor mounted underneath the train encounters a stripe the corresponding sound element is triggered. It can replace the one that was being played with a crossfade or can be mixed with the ongoing soundtrack. The powerful logic controller allows all sorts of operations, such as playing waiting spiels if the train is stopped unexpectedly.

The system can also control 512 channels of light on board, which translate into hundreds of sparkles to the rhythm of music.

We choose speakers adapted to the specific cars and seats layouts. We can achieve the high sound levels required by using ultra-efficient Class-D amplifiers. Typically, more than 3000 watts of audio power are used to enhance the experience of a single train. Our sophisticated measuring tools help us to tune the speakers system in the OLS according to the vehicle configuration.

All the elements above are integrated in a single device we call the Head Unit. This board contains the power source, audio player and amplifiers that feed the entire train. We have been able to reduce the weight of the whole assembly to just 28 Kg. All speakers of the train are fed by the Head Unit. 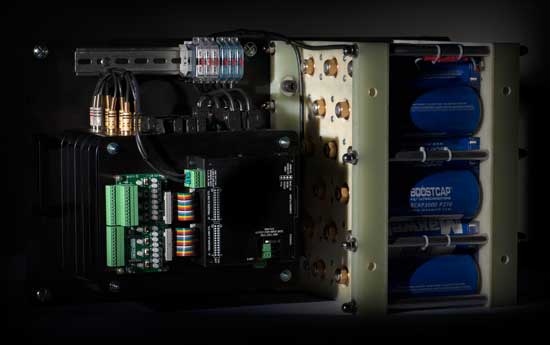 Unless our client wants to play a specific music, we put our close friend composer Patrice Peryieras to work to compose a unique piece for each segment of the ride. Once the music is written and approved, recording is taking place in the Maestro’s studio in the center for France. The studio can accommodate a large classical formation. The digital files are used in the train, where the final mix is done (often in uncomfortable position).

Emerging technologies are expending the possibilities of coasters. Nowadays, several options exist to synchronise wayside elements, such as video, sound and special effects with an extreme precision. Networked digital audio is also appearing on train, offering opportunities for customized content for specific seats for example.

Unlike technology fads, good music is timeless. On board a coaster, it turns a ride into a dramatic experience. OLS, the solution invented by Tejix, is simple, reliable and capable of audiophile performance. It’s the ideal solution to pump up an existing ride, or dramatically increase the impact of a new one.