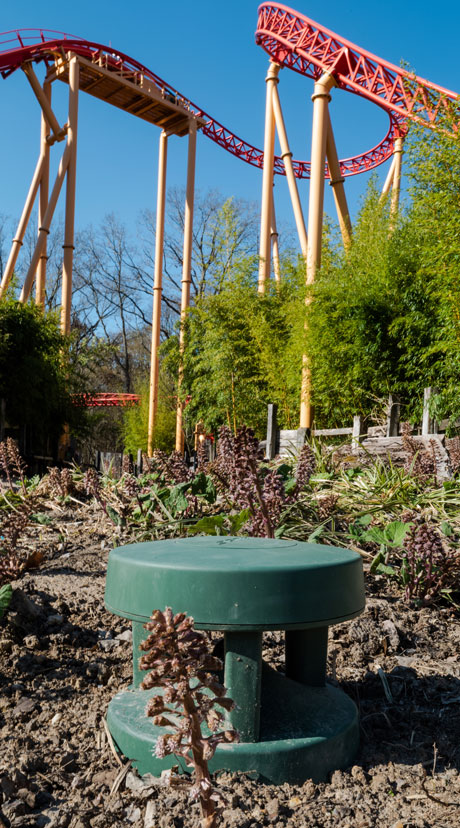 Most of the 600+ speakers are buried in the ground

Le Pal is a hybrid park zoo/theme park, which covers a very wide area in the center of  France. Its various hubs are connected by long forest trails.

Tejix has installed several systems at Le Pal. When they contacted us to design a new park-wide sound system, it was clear that the surface of the park was a real challenge. It quickly became obvious that the guests in a convincing sound field  would require a very large number of loudspeakers. After reviewing the needs in detail  with Pal's technical team, it was determined that no less than 600 loudspeakers were needed.

The next phase consisted in selecting adequate  amplifiers locations, as close as possible to the speakers. The use of networked audio gave us a great amount of flexibility, as access to the park-wide network is the only requirement to feed an amplifier with the signals that are intended for it. After reviewing the existing LAN infrastructure, it was deemed that it met the specifications required to transport the 115 high-quality sound channels needed for the project.

All the music, effects and announcements of the park come from two audio processors (main and backup). Routing, priorities and sound processing are managed by these devices.

Each attraction is equipped with a paging station, which is also simply connected to the network. The buttons on these stations allow the operator to select the area he is going to page: queue line, loading area, braking zone …

A fully networked sound system design offers many advantages in terms of flexibility, sound quality and control capabilities. For example, the audio processors trigger local and park-wide spiels and announcements based on a pre-established schedule. Speaker lines and amplifiers statuses are permanently monitored. Operators receive a warning on their tablets or computers should a fault is detected.

Not a single analog wire is used in this installation. Music and spiels are transmitted without any loss up to the amplifiers.

Precise sound tuning of each zone has been achieved thanks to our FFT measuring equipment. Most speakers are buried types. Being installed outdoor, their performance should be close to open field conditions. In reality, their characteristics tend to vary due to the nature of the soil, the environment or the distance between speakers. The differences between, for example, foliage and a gravel environment can be considerable. Accurate alignment allows you make sound level perfectly consistent, but homogeneous sound signature is achieved thanks to the precise alignment allowed by the central sound processor.

Le pal is a good example of how a well-designed sound system gives a park a whole new dimension. Visitors can now stroll in an immersive sound environment as good as the ones found in major venues.