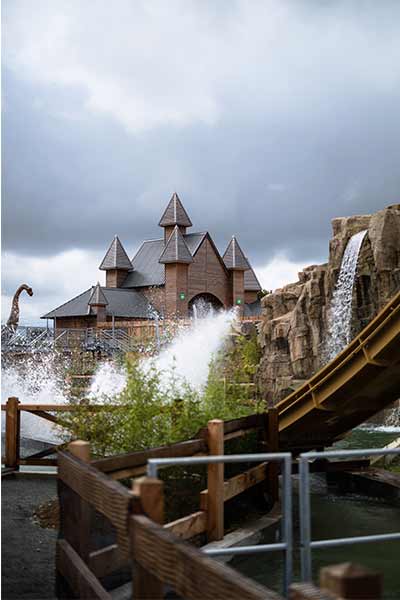 For the 2017 season, the Parc du Bocasse inaugurated « Splash-O-Saure » a new flume ride of a new kind: after a conventional start in forward direction, the logs are rotated 180° on a large turntable before approaching a first fall. Thereafter, vehicles enter a control tower where an elevator bring them 15m above ground for the last fall.

This ride is a first for Soquet SA, its manufacturer. It bring a lot of thrills in a relatively small space.

The new attraction is installed in the park's new "Jurassic" area, with a theme evoking an expedition to the land of dinosaurs, with a lot of props and rockwork.

Tejix installed the sound system and produced the soundtrack of the attraction. The audio system is based on a network of buried outdoor enclosures, as well as speakers located in strategic locations of the ride. Stored directly in the sound processor, clips are triggered by the ride control system at desired moments.

Splash-O-Saure is the demonstration that even regional parks can offer original experiences, with a great level of execution.