Deep in the crater...

Located in the heart of the French volcanoes area, Vulcania is a Theme Park dedicated to volcanology. Here, visitors can experience volcanoes in all sorts of film simulators and other interactive exhibits.

Vulcania’s main entrance hall, which also serves as a hub of the entire park, was more in line with the standards from two decades ago, when the park first opened, than today’s public expectations.

Gregory Mouilleseaux, Vulcania’s General Manager, explains the renovation project he had in mind: “ Setting the scene inside the main building of Vulcania was a multifaceted project: immersing our visitors in the middle the red volcanoes, not with a simple decor but with an impressive  living set. In addition, the area is the main hub of the park, and it’s often used for private functions and parties.” Mr.  Mouilleseaux also added: "Once our team has completed the design with the help of our show designer, we entrusted Tejix to make it happen. It was our first experience with them, so we were curious to see if their performance was up to their reputation. "

Designer Julien Bertevas came up with an impressive concept which revolves around an imposing central volcano. Far from being static, this piece is an animation that is constantly evolving, going from an almost idle state to a powerful eruption that occurs from time to time. As if a slice had been removed, the bowels of the volcano and the activity that takes place there are unveiled to visitors, thanks to a super bright innovative display system.

On the technical side, Tejix came up with a creative and effective way to simulate lava flowing on the rock surface.  Lighting moves surreptitiously according to the volcano’s phases.

"The different colors were chosen and then used in close collaboration with the park's scientific team" explains Edouard Trichet Lespagnol, Tejix’s lighting designer. "The spectral range extends from red to warm white, passing through orange and yellow.We use special techniques to obtain a very broad spectrum, such as using temperature correctors and diffusers.

The soundtrack design work was entrusted to Patrice Peyrieras. Although not exactly music, the sound elements (mostly true sounds of volcanic eruptions) are arranged as a score.

"In this kind of space, it is essential to finalize the mix on site to get a sense of the space" Patrice Peyrieras explained.

Over 30,000 W of amplification associated with more than 50 speakers divided in 32 audio channels bring the Maestro’s work to life.

About his work, Kazuki told us, "The central volcano is erupting at regular intervals, the visitor must feel in a space in perpetual motion without even realizing it. Just the strong eruptions are noticeable.”

Even if it performs complex tasks, the system is extremely simple to operate and maintain. During design, special attention has been paid to the energy efficiency of amplifiers and lighting devices in order to limit power consumption.

Gregory Mouilleseaux is fully satisfied with the feedback from his guests: "The result is appreciated by our visitors so much so that they ask us why we did not do it before !!!" 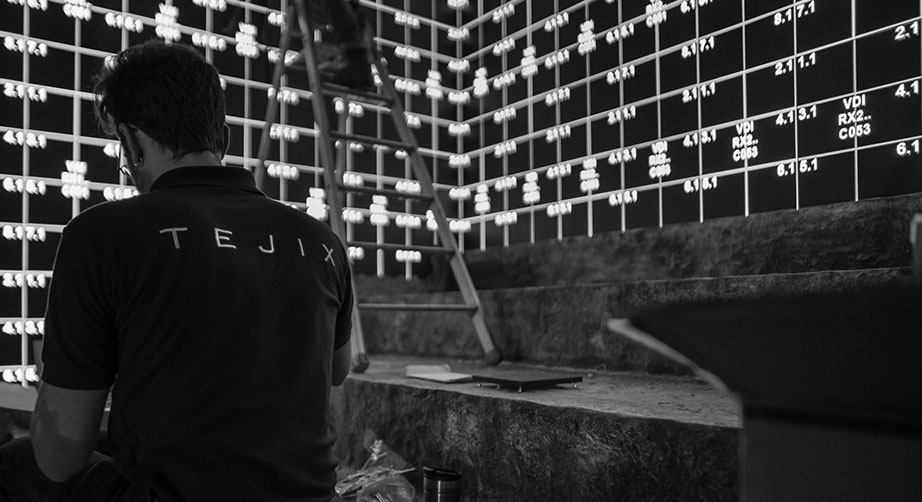